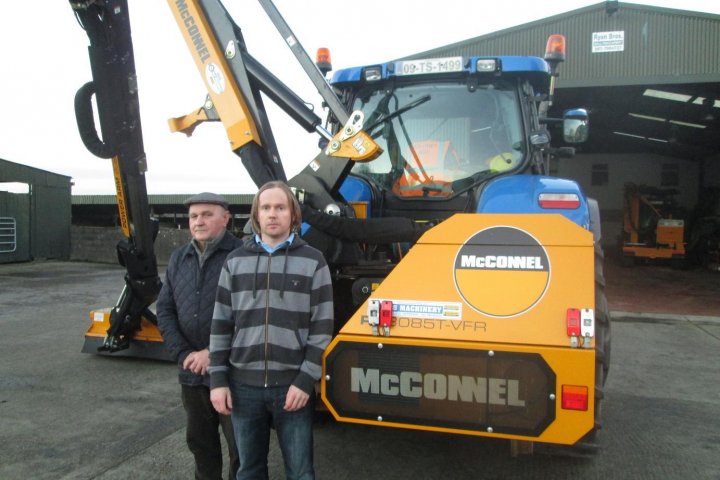 Every year Thomas and Jim Moloney are faced with one of the toughest vegetation clearance challenges in Ireland. 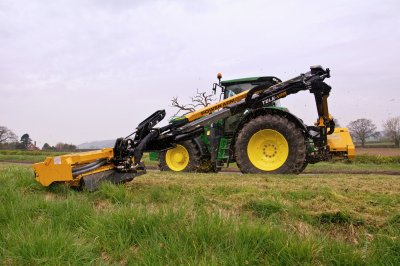 They have just eight weeks to clear miles of overgrowth along the country’s busiest railway - the Dublin to Cork line – working overnight when passenger services aren’t running in a race against time to get the job done.

Thomas’s team depend on Power Arms that deliver the best in performance, precision, and reliability, but with so much vegetation to cut in such a short period, the work is intense and operator comfort is also essential for success.

That’s why Thomas and his father Jim were among the first customers in the world to purchase the new PA8085 Tele-VFR - an 8.0m, 85 hp reach arm with Telescopic Variable Forward Reach.

The new machine’s Tele-VFR capabilities enable operators to position the flailhead alongside the cab and then extend or retract the arm for extra reach on demand.

Thomas explained the benefits of this new technology, saying: “Modern tractor designs position the cab further forward which is great for most jobs but is far from ideal when cutting grass or hedges because you’re constantly looking over your shoulder and twisting around, which can put strain on operators.

“The beauty of this machine is that it is much more comfortable to operate when working for long periods, and because the visibility is better, it also improves precision and safety.

Thomas’s requirements for power and reliability are more than met by the PA8085T-VFR. McConnel’s new flagship Power Arm boasts 85hp hydraulics and its proven flailhead technology makes light work of even the thickest vegetation, while Domex steel construction and premium build quality ensure the machine is robust enough to thrive under intensive workloads. 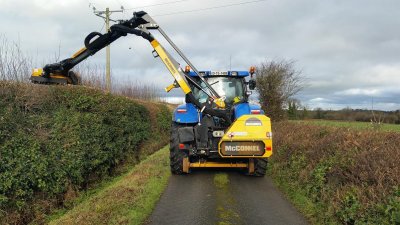 "Tele-VFR machines offer such a huge improvement in comfort and precision that they are definitely worth the money."

Working out of their base in Clogheen, County Tipperary, Thomas and Jim’s team handle work for everyone from large companies to small farmers carrying out a wide range of tasks from tree surgery to hedge-cutting, with each of the company’s four Power Arms completing around 1,000 hours of work-a-year

One of Thomas’s biggest challenges is finding machines which are not only adept at embankment mowing where long reach is essential, but are manoeuvrable enough to work effectively in the narrow lanes which dominate the landscape of southern Ireland.

It’s here the flexibility of the Telescopic-Variable Forward Reach machine comes into its own:

Thomas said: “Tele-VFR is very versatile, and because you can retract the dipper arm whenever you want you can work in confined environments without sacrificing manoeuvrability.

"The arm geometry is also very good because you can cut straight up alongside the cab without overhang on the far side of the tractor.”

Thomas and Jim share many years’ experience as contractors and believe the Tele-VFR machine is one of the most important innovations ever launched by McConnel.

He said: “We have had such a positive experience with it that we wouldn’t hesitate to recommend it. It’s an expensive machine but it is offers such a huge improvement in comfort and precision that it’s definitely worth the money.

“My only complaint is that I would like to have had one ten years ago!”

© 2020 McConnel Limited• Twose Classic Line and Kellands Classic Line are trading brands of McConnel • Registered in England No. 00305192 • Part of the Alamo Group